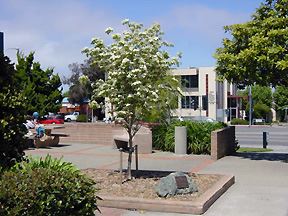 In October of 1990, Narita, Japan became San Bruno's sister city. The relationship between the two cities started in 1982 between the Rotary Clubs of the two cities. Since then the relationship between San Bruno and Narita has flourished. Narita is a suburb of Tokyo, and the home of Narita Airport, which handles as many as 20 million passengers annually, making it one of the busiest airports in the world.

Sister City Plaza, near the San Bruno Public Library, features a tree donated by the City of Narita.

The population of Narita City is approximately 120,000. It was incorporated in 1954 when six villages and a town joined together. Since then the area has flourished as an international city. Narita has many historical and cultural sights to offer, including Naritasan Shinshoji Temple, which is a Buddhist cathedral, and a beautiful park called Naritasan Park.

The climate of Narita is similar to that of the East Coast of the United States. The average temperature ranges between 30 degrees Fahrenheit in the winter and over 80 degrees Fahrenheit during the summer. They receive about 60 inches of precipitation annually, most of which comes between May and September.

There have been many visits from the people of Narita to San Bruno since 1990. Every year students from Narita visit us through a formalized Narita/San Bruno exchange program. Similarly, San Bruno sends several students and two teachers to Japan on a yearly basis. During these visits, the students have an opportunity to stay with a family and learn about each other's culture. Each city government has also sent several city officials to visit each other.

Many gifts of a cultural and historical nature have been exchanged during these visits with Narita, several of which are on display at the San Bruno City Hall. The Library also has added books from and about Narita for the public's viewing and enjoyment. In addition, Narita has donated several trees to help beautify the San Bruno City Park and also to celebrate the relationship between the two cities.